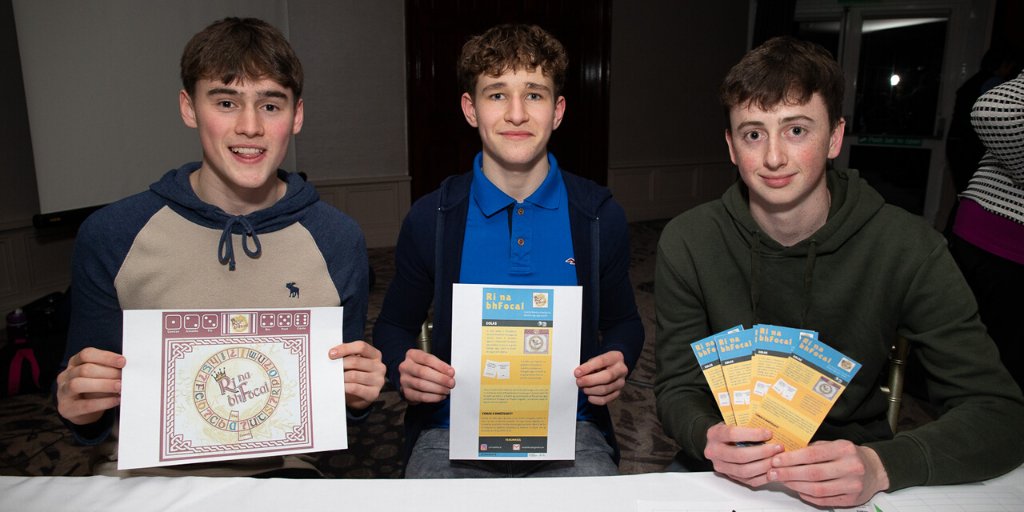 The Corca Dhuibhne natives will now represent Ireland at the JA Europe Company of the Year Competition 2020 which was due to be held in Portugal but as a result of the COVID-19 travel restrictions will now be held online in July. This is the second time that the winners of Údarás na Gaeltachta’s Clár na gComhlachtaí will have the opportunity to participate at the European level of the competition.

The national final was held online this year and the Minister for Education and Skills, Joe McHugh TD, Minister of State for Gaeilge, Gaeltacht and the Islands, Senator Seán Kyne and Údarás na Gaeltachta CEO Mícheál Ó hÉanaigh were on hand to send inspiring video messages to the students during the event.

With more than 750 Transition Year students taking part in Gaeltacht regions in Cork, Galway, Donegal, Kerry, Mayo, Meath & Waterford, eight teams were ultimately selected to proceed to the National Final. The standards set by these regional winners means the winner of the Údarás na Gaeltachta Clár na gComhlachtaí can be regarded as particularly astute entrepreneurs.

Liam Ó hÓgáin, Finn Daibhéis and Patrick Saunders were the founding members of Rí na bhFocal. Rí na bhFocal is a new interactive Irish language board game for 2-6 players that can be adapted to be played by children and adults of all ages. The successful company from Pobalscoil Chorca Dhuibhne were mentored by their business studies teacher Trish Uí h-Éanacháin.

This year’s Marketing and Finance Award went to Photraits from Coláiste na Coiribe, Galway.  The team expertly showed how they carried out marketing activities and the importance of financial planning.  Photraits is a special service where a customer can send a photograph via email/social media and they will draw a hand-made portrait and send it to you for a fee.

Clár na gComhlachtaí is developed and delivered by Údarás na Gaeltachta and JAI.  Students create, operate and manage their own business as they move from the idea generation stage, to finance, production, marketing, sales right through to going to market. Local business volunteers, executives from Údarás na Gaeltachta and JAI mentored the students alongside their teachers.

Emerging from very competitive regional finals in Kerry, Mayo, Galway and Donegal, were teams from:

All represented their regions with great distinction at the National Final.

The judging panel comprising of Mark de Faoite from Údarás na Gaeltachta and Bernie Ní Shúilleabháin of Telegael was quite impressed with the performance of all the students across each element of the competition however Rí na bhFocal from Pobalscoil Chorca Dhuibhne just edged to come out on top based on the quality of their innovative business idea and overall performance on the day.

Europe-wide research shows that students who participate in entrepreneurial education activities such as Clár na gComhlachtaí are more likely to start their own business, are at lower risk of being unemployed and are more often in steady employment into adulthood.

Mícheál Ó hÉanaigh, Chief Executive Officer with Údarás na Gaeltachta, commented: “Despite the uncertainty of the current situation it was inspiring to witness such enterprising young people at the Údarás na Gaeltachta Clár na gComhlachtaí 2020.  Their knowledge and enthusiasm for their business ideas indicates that enterprise in Gaeltacht areas is in safe hands. Údarás na Gaeltachta is proud to help promote student entrepreneurship in partnership with Junior Achievement Ireland and I’m sure we will be seeing more of these young entrepreneurs in the future. Special congratulations to our winning team Rí na bhFocal from Pobalscoil Chorca Dhuibhne for your dedication and entrepreneurial flare.  I am confident that these efforts will inspire new Gaeltacht enterprises in the future.”

Helen Raftery, CEO of JAI added: “The support of Údarás na Gaeltachta has enabled more than 750 senior cycle students to take part in meaningful real-to-life entrepreneurial experiences across the Gaeltacht areas through Clár na gComhlachtaí this year. We wish to extend a special thank you to teachers and business mentors for their dedication in supporting and developing the entrepreneurial talent of these students. The wide-ranging skills these young entrepreneurs have developed and practised throughout Clár na gComhlachtaí will be invaluable as they progress into the world of work. Our national finalists have shown great resilience and impressive creativity, team working and communication skills as they competed in our first virtual final – no mean feat. Congratulations to all the teams that won the right to compete at the regional and national finals and to Pobalscoil Chorca Dhuibhe, Daingean Uí Chúis, Co. Kerry for emerging as winners of Údarás na Gaeltachta – Clár na gComhlachtaí 2020. They will go on to represent Ireland at the JA Europe Company of the Year Competition 2020”.