National Final of the Company of the Year Competition will take place this year in DCU Ryan Academy on the 13th/14th May. The finalists have come a long way from their classroom. From brainstorming to now actively selling, students have gained first-hand experience of how a business functions. Good luck to all of the National Finalist, and let’s see who will represent Ireland in Berlin, Germany at the JA European Final.

FARM S.I.S ‘Safety is Success’ is a mini company, from The Royal and Prior Comprehensive, selling jigsaw puzzles based on three themes; Beware Of the Bull, Stay Away From Moving Machinery, and Stay Away From Slurry Toxic Fumes. The puzzles were designed to raise awareness of the  dangers on a farm. The idea for this product came from the Finance  Manager James Rouslton when his neighbour was seriously injured in a farming accident during the summer of 2014. The mini-company qualified for the national final after they were named winners of the Donegal-Sligo regional final.

Step Up is a transition year mini company, from the Royal School Cavan, which has    created  an electric tractor step for people with mobility problems when it comes to      entering and  exiting their tractor.Step Up qualified for the national final of the          competition   after they were named winners of the Monaghan-Cavan-Louth regional    final.

Shield is a mini-company producing and selling their product ‘Connection Protection’. The product  is a small plastic device used to clip around the top of your charger to secure and   ensure that the charger end does not bend or fray. The company aims to resolve a very common problem so ‘Say    hello ‘Connection Protection’ and goodbye to all broken chargers’. Shield was the Donegal-Sligo  Regional winners of the competition, qualifying for the national final.

Guide a Key is a team of students from Desmond College, Newcastle West. The company  has  designed and manufactures a device which aids people with limited dexterity insert  their key  into a lock. Guide-a-key qualified for the national final after their win in the   Clare- Galway- Limerick regional final.

Bella Bristles, from Ardscoil na Trionoide, Athy, Kildare, offer individually painted and personalised hair rbushes to its customers, giving a ‘one of a kind’ feeling from the purchase of the product. Bella Bristles has a successful media reach and has seen great number of followers throughout its lifespan. The company was qualified for the national final of the competition after they were named winners of the Leinster regional final.

ACE Devices is a company consisting of five very dedicated students from St. Caimin’s  Community School Shannon, Co. Clare. The company sells a device which protects  cables  for handheld devices aiming to lower the risk of fraying the end of the  chargers.  Ace  Devices were the winner of the Clare-Galway-Limerick regional final and thus qualified for  the national final in DCU Ryan Academy.

Sláinte Kids, from St Joseph of Cluny, aims to combat childhood obesity by offering a pack containing useful and relevant information about this growing issue in Ireland. The pack contains reward charts, exercise cards, recipe cards and an information booklet  to help both parents and children to understand about healthy habits. The product has shown great response online, including retweets from Doctor Ciara Kelly and RTE’s Operation Transformation. The team was mentored by Kevin Maguire, PwC, to develop the idea and make it into a potential business.  Sláinte Kids qualified for the national final after they won in the Leinster regional final. 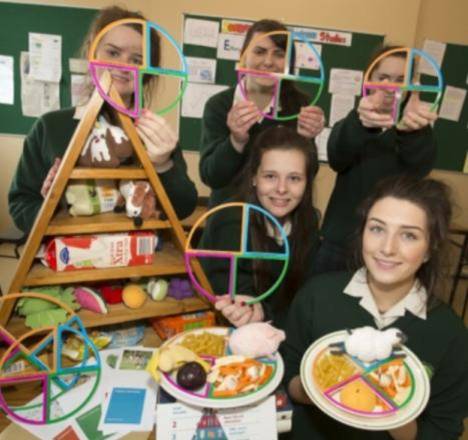 Perfect Portions is a mini company from St. Mary’s Secondary School, New Ross, Co.  Wexford. The company aims to raise awareness of the rising issue of childhood obesity  in  Ireland by a 7” portable portion divider. The company aims to inspire and promote a  healthy  lifestyle, to develop good eating habits and to make a difference.  Perfect  Portions was the  winner of the Munster regional final thus qualifying for the national  final.

Changes, from Bishoptown Community School, aims to challenge mental health in 30 days. Changes aims to raise awareness of Mental Health in young people and to  provide a practical way for young people to learn exactly what mental health is. Changes won the Munster regional final of the competition thus qualifying for         the national final held in DCU Ryan Academy.

Rainwater Harvester, Colaiste Ris, Dundalk, Co.Louth, is a new innovative idea set up to  save customers on the new water charges by collecting rainwater, filtering and reusing  it  in the home or outside (e.g. car washing, gardening). Rain water harvester is a  compact  system that sits at the side of your house taking up very little ground space.  Rainwater  Harvester was the Monaghan-Cavan-Louth regional final winner of the  competition and  thus qualified for the national final held in DCU Ryan Academy.