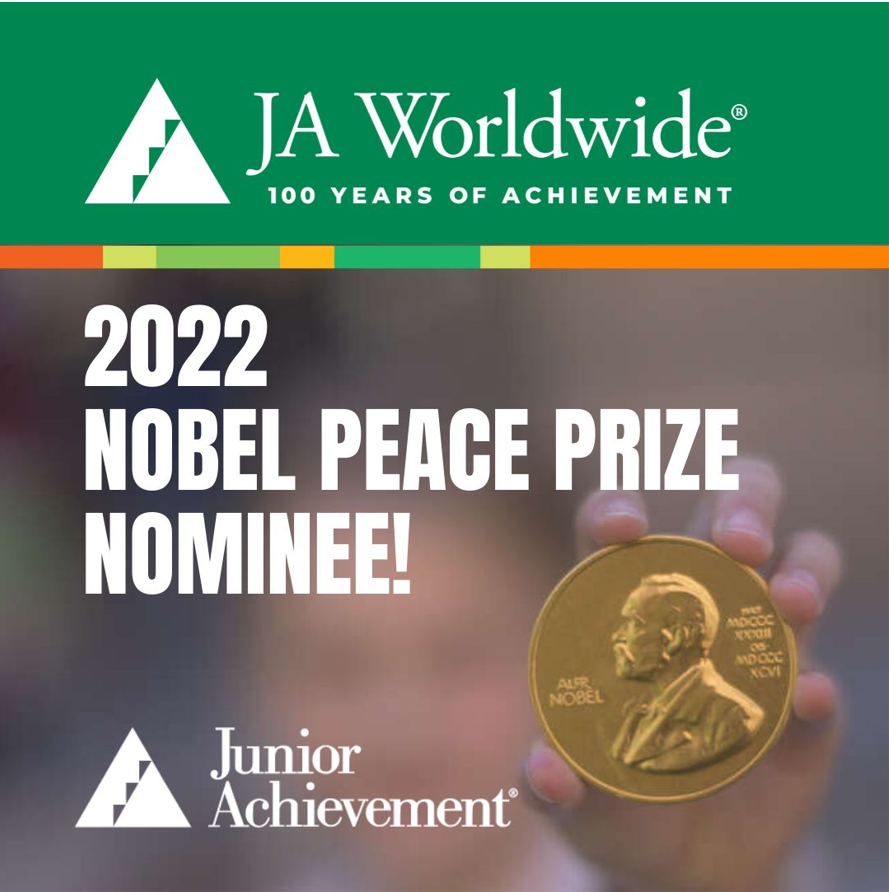 Junior Achievement Ireland is delighted to announce that JA Worldwide, of which it is the Irish member, has been nominated for the 2022 Nobel Peace Prize. For 25 years, Junior Achievement Ireland has been serving young people across Ireland and equipping them with the skillset and mindset to create sustainable businesses, find meaningful employment, and build thriving communities.

Welcoming the news, Helen Raftery, CEO of Junior Achievement Ireland said: “As we prepare to celebrate 25 years in operation in Ireland, we are delighted to play our part as a proud member of the JA Worldwide network and share in the recognition of the nomination. With hugely influential nominees this year like David Attenborough, Pope Francis, Greta Thunberg, the World Health Organisation and others, not to mention so many previous nominees and winners, we are honoured to be associated with the Nobel Peace Prize.”

“Our programmes are facilitated by volunteers and span entrepreneurship, financial literacy, and work readiness. They complement the work of schools in helping to inspire young people to realise their potential, by valuing their education and developing the skills and attitudes needed to shape their own future. The young people of today will be the leaders of tomorrow who will create a more peaceful and stable world. We are proud of our association with JA Worldwide and honoured that it has been recognized alongside the other nominees who are striving for a more peaceful and sustainable world.”

Nominations may be received only from heads of state and certain elected officials, university professors in selected fields, past Nobel laureates, and a few other notable individuals. Although the identity of each nominee officially remains anonymous for 50 years, JA Worldwide received permission to share that JA was nominated by a distinguished Professor of Law and International Affairs who was impressed by its global reach, its success in delivering economic empowerment to youth at scale, and an ability to find unity in diversity. For centuries, unemployment and poverty have led to political instability, violence, and war. By economically empowering youth on all continents, JA serves as a conduit for peace.