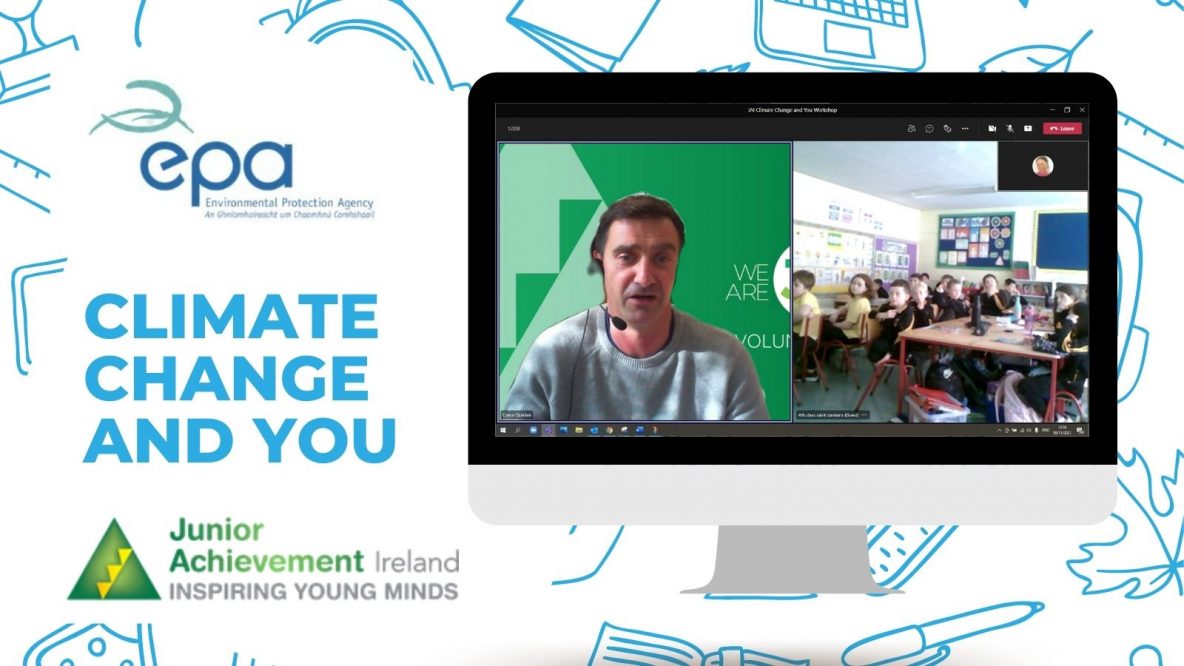 784 primary school students from 26 schools nationwide had the opportunity to learn about climate change during Science Week, thanks to expert volunteers from the Environmental Protection Agency (EPA). A further 460 students will participate in the workshop during this school year bringing the total student reach to 1,200.

23 EPA volunteers guided students through virtual climate change workshops over the course of Science Week. These workshops were developed by Junior Achievement Ireland (JAI) in conjunction with the EPA and were delivered online as part of an exciting blended learning experience.

Through hands-on activities, students analysed their carbon footprint and completed an energy audit of the classroom, allowing them to evaluate the human impact of their class. The students learned that Irish people have amongst the highest greenhouse gas emissions level per person in the developed world.

However, once they understood their impact, the students were then able to brainstorm ways in which they could collectively and individually reduce their impact on climate change. Niamh Hatchell of the EPA Communications Office said:

“The education of young people on the importance of climate action and the environmental impact of daily activities needs to be a priority. The EPA is delighted to partner with Junior Achievement Ireland during science week in order to create environmental awareness among primary school children participating in JA programmes in schools around the country. The workshops are fun and an inventive way of engaging with these important issues at primary school level.”

The EPA Climate Change and You workshop are just one of many opportunities afforded to students, thanks to the EPA’s support of JAI since 2016. In that time 184 volunteers have reached 4,600 young people through Junior Achievement (JA) programmes designed to encourage young people to remain in education and help them to develop the skills they need to succeed in a changing world.

“The educational value of students working with role models and getting the chance to learn from them is well-established. Thanks to the EPA, almost 800 students had an exciting opportunity to experience environmental issues brought to life in a real and meaningful way. We are grateful to both our partner schools and the 23 EPA volunteers that helped us to communicate these important messages to young people all over the country.”