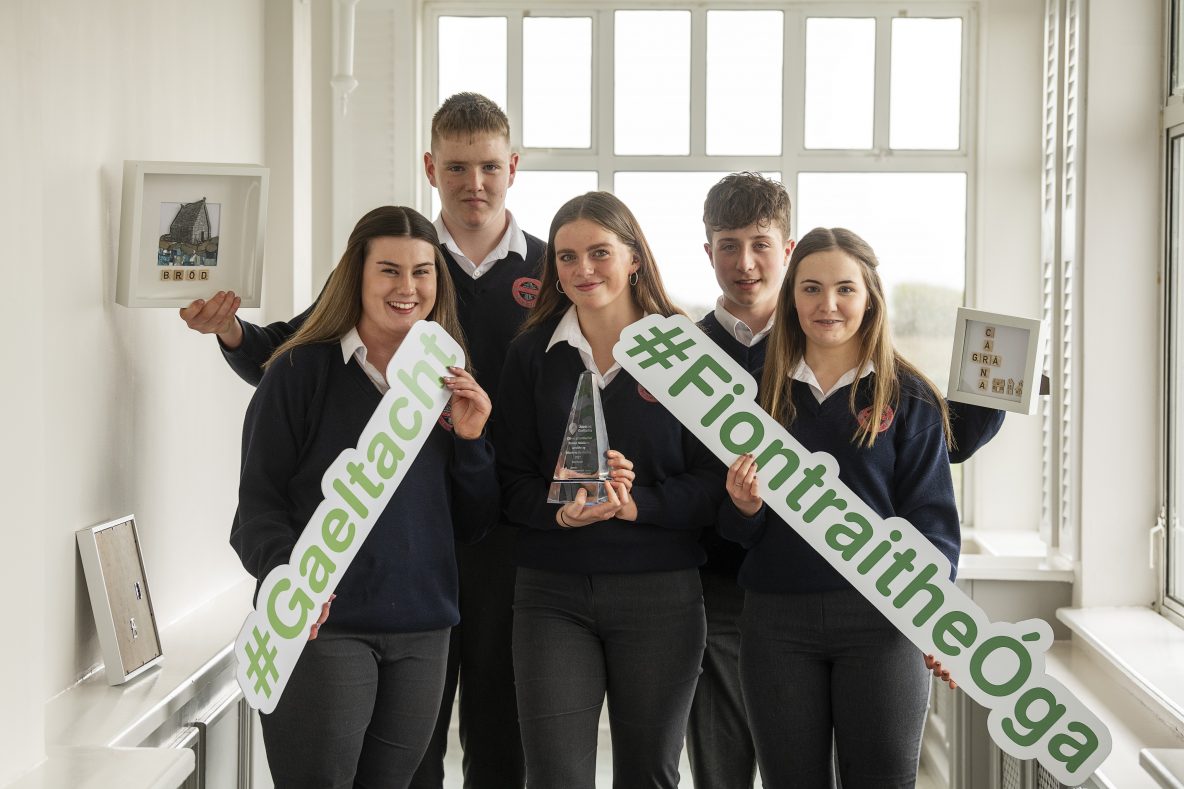 The pupils from Scoil Phobail Mhic Dara will now represent Ireland at the JA Europe Company of the Year Competition 2022 this July in Tallinn, Estonia.  This is the fourth time that the winners of Údarás na Gaeltachta’s Clár na gComhlachtaí will have the opportunity to participate at the European level of the competition.

Seven mini-companies established by pupils from Donegal, Mayo, Galway, Cork and Kerry battled it out in this year’s National Final. Students came together under one roof for the first time in two years to present their businesses to the judges at the one-day national final.

With more than 750 Transition Year students taking part in Gaeltacht regions in Cork, Galway, Donegal, Kerry, Mayo, Meath & Waterford, seven teams were ultimately selected to proceed to the National Final. The standards set by these regional winners ensure that the overall winners of the Údarás na Gaeltachta Clár na gComhlachtaí can be regarded as particularly astute entrepreneurs.

Dara Ó Cualáin, Stephen Breathnach, Ciara Áine Ní Mhaoilchiaráin, Clíona Ní Dhuinn and Ciara Máire Ní Chualáin are the founding members of Frámaí Chonamara. This company makes personal frames for sale as gifts that are placed within frames with a special design.  Their products have been very popular since the business was established and are being sold throughout Ireland and further afield. The successful company from Scoil Phobail Mhic Dara were mentored by their business studies teacher Róisín Ní Chonfhaola.

This year’s Marketing and Finance Award went to Faoiseamh Farraige from Pobalscoil Chorca Dhuibhne, Daingean Uí Chúis, Co. Kerry.  Faoiseamh Farraige creates jewellery inspired by the beautiful beaches around the Daingean Uí Chúis Peninsula.  Beaches bring the mind a sense of tranquillity so the company began making necklaces to bring this sense to everyone. The necklaces are connected to a website via a QR code, which contains information, stories, and pictures of the beaches.

Gairmscoil Mhic Diarmada from Árainn Mhór, Co. Donegal were the worthy winners of the Innovation Award with their company Rabhchán Ola don Tanc. The idea behind this business is an instrument that indicates when the level in the oil tank has gone past a certain level. There is a light on the measuring pipe which glows when the oil level in the tank is low.

Clár na gComhlachtaí is developed and delivered by Údarás na Gaeltachta and Junior Achievement Ireland (JAI). Students create, operate and manage their own business as they move from the idea generation stage, to finance, production, marketing, and sales, right through to going to market. Local business volunteers, executives from Údarás na Gaeltachta and JAI mentored the students alongside their teachers.

represented their regions with great distinction at the National Final.

The judging panel comprising of Sinéad Ní Fhátharta from Údarás na Gaeltachta and Bernie Ní Shúilleabháin of Telegael was impressed with the performance of all the students across each element of the competition however Frámaí Chonamara of Scoil Phobail Mhic Dara come out on top based on the quality of their innovative business idea and overall performance on the day.

Europe-wide research shows that students who participate in entrepreneurial education activities such as Clár na gComhlachtaí are more likely to start their own business, are at lower risk of being unemployed and are more often in steady employment into adulthood.

Mícheál Ó hÉanaigh, Chief Executive Officer with Údarás na Gaeltachta, commented: “It was inspiring to witness the young entrepreneurs together again at the Údarás na Gaeltachta Clár na gComhlachtaí 2022.  They expertly showcased their business ideas and illustrated that enterprise in Gaeltacht areas is in safe hands. We are proud to empower entrepreneurship in pupils in partnership with Junior Achievement Ireland. Special congratulations to our winning team Frámaí Chonamara from Scoil Phobail Mhic Dara for your dedication and entrepreneurial flare. I am confident that these efforts will inspire new Gaeltacht enterprises in the future.”

Helen Raftery, CEO of Junior Achievement Ireland added: “We are pleased to be able to host an in-person gathering again after two years of virtual events. The opportunity to showcase all the hard work and ingenuity of the students is welcome and further underlines the benefits of the programme and the practical entrepreneurial experience it provides for young people throughout the Gaeltacht.  We wish to extend our thanks to Údarás na Gaeltachta for its ongoing support and to acknowledge the teachers and business mentors for their dedication in supporting and helping to develop the entrepreneurial talent of the participants. Congratulations to all the national finalists and well done to Frámaí Chonamara from Scoil Phobail Mhic Dara, Carna for emerging as winners of Údarás na Gaeltachta – Clár na gComhlachtaí 2022. The team will go on to represent Ireland at the JA Europe Company of the Year Competition 2022.”